The Story of Ukraine Flags for Solidarity

Ukraine Flags for Solidarity started with our business friends in Ukraine, the tech company named Euristiq. Co-founded by Ivan Muts, Euristiq is a software development company headquartered in Lviv, Ukraine. Six months before the Russian troop build up on the Eastern borders of Ukraine, Sal Edwards and Estelle Gray’s technology company, Heart Zones, contracted with Euristiq to build software for their school and health club fitness solution. 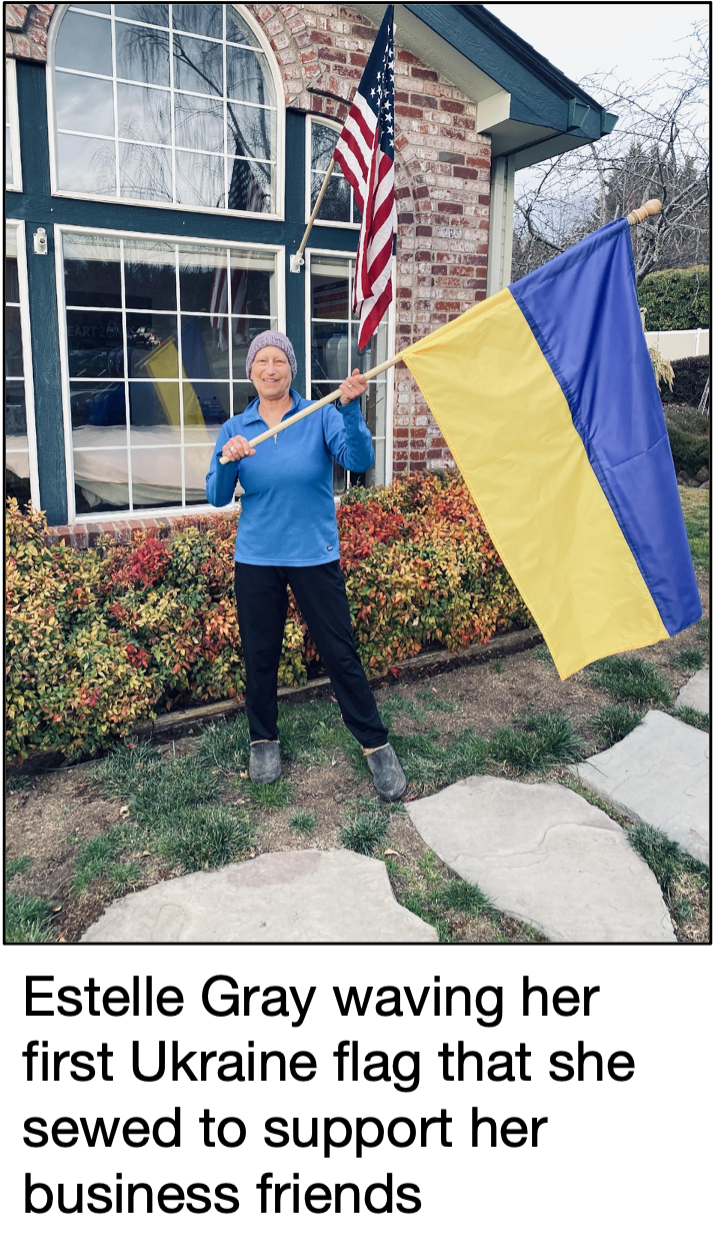 Then, Putin’s War started on February 22, 2022 when Russian forces invaded Ukraine. Deeply disturbed that her business friends were in dire peril, Sal sent an email to Michael Sawicky, another friend in the software developing business, located in Ashland, Oregon. Did Michael know of a rally in support of Ukraine seeking a peaceful and independent future? Michael replied, “Hey, Sal and Estelle, bring your Ukrainian flag for the rally on Wednesday, March 2nd, 2022 in downtown Medford, Oregon.” So we did just that and it was at that rally whereUkraine Flags for Solidarity started.

It is not surprising. You can’t buy a Ukraine flag anywhere in Southern Oregon’s Rogue Valley. Estelle’s response was that if you can’t buy one, make one. She then proceeded to a local fabric retailer to purchase the blue sky and the gold wheat colored fabric, Ukraine’s national flag 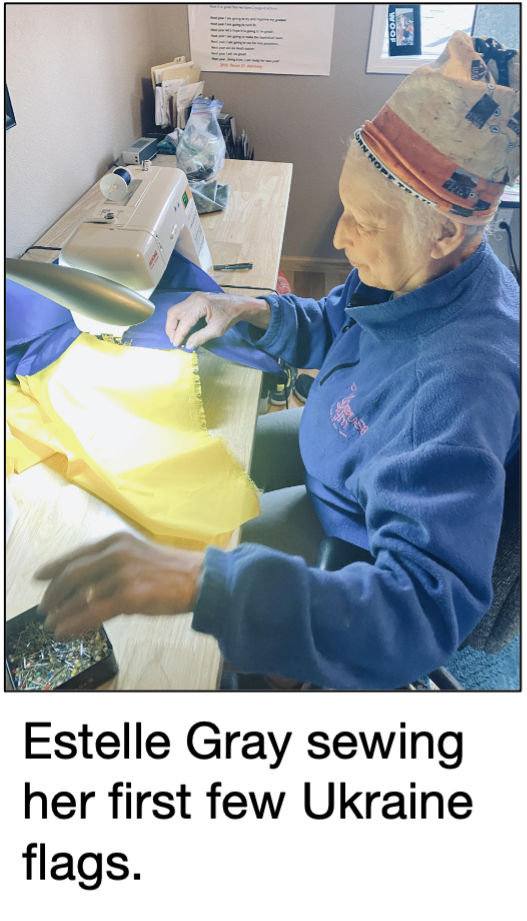 design. And, as a skilled sewer, she had her sewing machine whirling as she sewed a Ukraine flag. It took her one-hour.  Next, she bought an American flag. Sal used her drill and mounted brackets to hang the two flags in front of their home in Medford. Always avid flag gals, neither of them had flown the American flag in possibly twenty years. Today, both women are proud of America standing up for Ukraine. Taking that patriotic pride, we decided to fly the two flags side by side for the first time in two decades in front of their home in Medford.

Attending the rally representing the online newspaper, the Ashland News, was the young reporter for the online resource.

She photographed, as well as interviewed, Sal. You can read about that encounter here: https://ashland.news/ashland-residents-join-medford-rally-supporting-ukraine/ 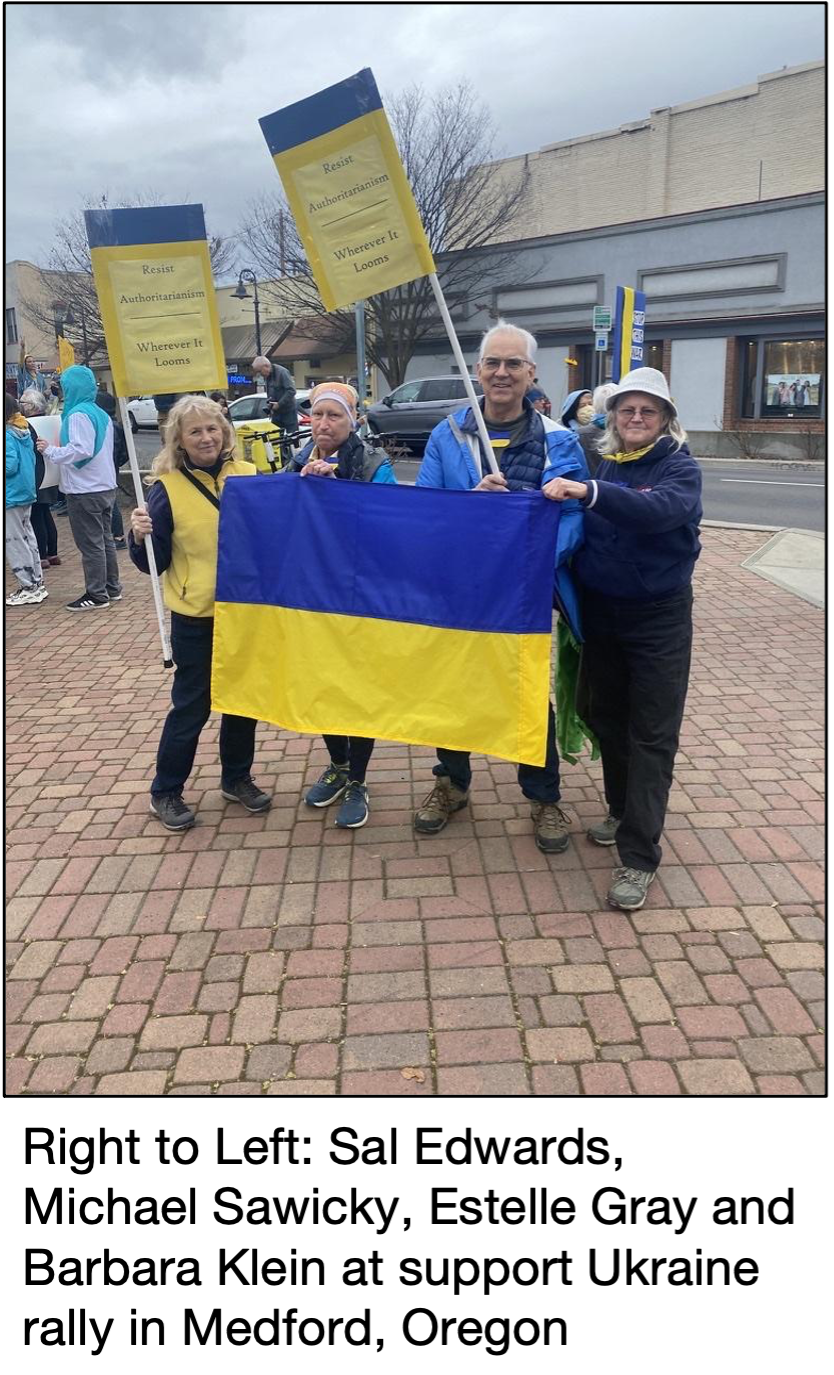 In fact, this Ashland news reporter was so moved by this experience as a journalist that she asked to donate and buy a Ukraine solidarity flag from Estelle. She too wanted to support Ukrainians, financially and emotionally, in their fight against the Russian invaders. Estelle, who goes by the nickname given by her father, “the Princess,” had only made one flag but that one flag was the triggering point. This, followed by the reporter expressed interest, spurred the Princess to say to Sal, “Let’s do a fundraiser for our business friends in Ukraine and I’ll sew flags.” The two women went into action.

First step was to contact Euristiq’s software engineer and project manager for Heart Zones’ software, Yurii Pochapskyi. We asked Yurii how we could support the patriotic people of Ukraine. Yurii clearly stated that the troops on the front lines did not have enough medical supplies. He went on to say that if we could purchase emergency medical kits and get them to Poland, he would then get them distributed to the brave heroes fighting for Ukraine’s independence. Yurii said he would raise the money to pay for the medical supplies. We responded by asking Yurii if we could send money to support them and he replied by saying that they will need money to rebuild their country, in addition to the much needed medical supplies. Money can buy goods, but there were no medical goods to purchase in neighboring European countries. If we could purchase medical supplies in the USA and get them shipped to Poland, Yurii would arrange for them to get to the front lines. We agreed to get him what he asked for by starting fundraising, awareness and emotional support efforts from the American people to their fellow friends in Ukraine as a citizen-to-citizen effort versus going through NGO’s or US government agencies.

Our second step was to put together a national not-for-profit group of volunteers to make Yurii and Ivan’s request come true — get medical supplies to the front lines for the Ukraine soldiers with a USA army of volunteers – everything would go to Ukraine. The Princess went to work to find and train volunteers to sew Ukraine flags – garden flags, streaming flags, lapel flags, and pole flags. Sal went to work to organize an all volunteer committee to create a website with frequent updates from Ukraine’s “business friends on the streets of Lviv”. One of Sal’s volunteer jobs was to get the word out that it was patriotic and supportive for Americans to fly the Ukrainian flag on their lawns, wear on their clothes, and display on their homes and businesses from their flag poles.

Third step— the current one — is to organize sewers to make flags and do mass marketing communications to find donators. Better yet is finding volunteer sewers and donors to join together to share the emotional impact of American citizens supporting Ukraine citizens through individual and group efforts. Yurii asked that each time someone donates to Ukraine Flags for Solidarity and flies the Ukraine flag if we would email them a photo of that person/home. It is a way for the people living in this Putin war-hell to feel how much people, from small towns like Medford and Ashland, Oregon to the big cities of America, are proud of the bravery of Ukrainians and their willingness to seek at all cost their independence.

That’s where we are on March 16, 2022. The new website where you can volunteer to be a sewer or a donor is now launched: www.UkraineFlags.org. We are asking each and everyone one of you who reads this story to join in on this effort – become a sewer, become a donor, become both.