Why:  Our company works with a Ukraine software development company, Euristiq. Located in Lviv, Ukraine,  the Euristiq team reached out and asked my company, Heart Zones for support. Responding as quickly as possible, a team of friends, family, and colleagues went into action to create a way for supporters to provide emotional, financial, and patriotic support. We have started a not-for-profit: Ukraine Flags for Solidarity. Euritiq software engineer Yurii Pochapskyi, said that the military is in desperate need of medical supplies for the soldiers fighting on the front lines. Europe is sold out of emergency medical supplies. Ukraine doesn’t need money because money can’t buy them medical supplies if there are none to purchase in Europe. We decided to do whatever we could to support the Ukrainians fight for independence and freedom by launching Ukraine Flags for Solidarity fund raiser.

What You Can Do: We are asking that you volunteer to help the Ukraine’s soldiers with medical supplies. You can sew Ukraine flags. You can donate to purchase fabric. You can do both.

Sew: We’ll ship you “Flag in a Bag” with fabric and instructions on the pattern for the flag. You will postal mail the flags to the donors.

Donate: You can donate directly to Ukraine Flags for Solidarity and we’ll get those sewing the materials they need and you will receive a Ukraine flag. Yurii and Euristiq have asked for emotional support — just to know that we care they would like to see the flags flying in America. It also shows your patriotic support for America.

What We Are Doing: All of this effort is from an all volunteers and 100% of all donations will be used for medical supplies for Ukraine. Our effort all started here:

How we got started 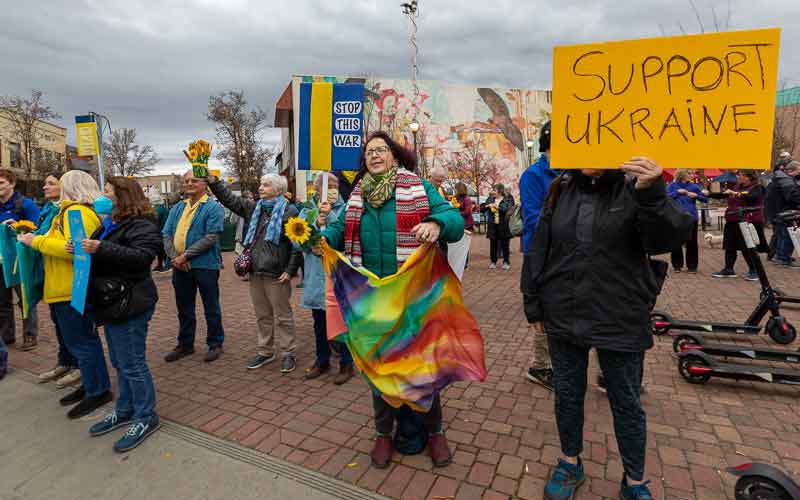 Demonstrator: ‘This is not political, this is humanitarian’

Supporters from throughout the Rogue Valley donned Ukraine’s national colors Wednesday Afternoon, gathering to create a sea of blue and yellow sprouting with sunflowers and signs calling for peace on Vogel Plaza in Medford.

Some in the crowd of dozens had close or indirect ties to Ukraine, while others were simply empathetic over the violent Russian attack on the eastern European country.

Estelle Gray and Sal Edwards of Medford held up a nylon Ukrainian flag as passing vehicles honked in support on the corner of Main Street and Central Avenue .

Gray has been sewing the flags herself and made homemade Ukrainian flag pins for the gathering, which was organized by Oregon District 2 Indivisible. Ashland Peace House and Rogue Valley Veterans for Peace co-sponsored the rally.

Daily Updates from the Front Lines

We continue staying safe. It looks like Russia is focused on eastern Ukraine, especially Kyiv.
So until Kyiv stands, western Ukraine is safe.

Everyone here understands that, and we do our best to supply the frontline with humanitarian aid and ammunition. Also, many volunteers are helping refugees from the east to have food and shelter here. Many people move farther west, to Poland and the EU, but many families stay in western Ukraine if they don’t want to separate from men who are not allowed to cross the border.

This war might last for weeks, and even months, so we also start thinking about maintaining and growing our business and keeping national economy alive.

My wife and kid are here with me in Lviv. She refused to leave the country without me. And I cannot go as men 18-60 y.o. are not allowed.
But we are safe until Kyiv stands. And we do our best for it to stand.

I just had a call with our pediatrician. She asked me if we are in Ukraine as she has the last vaccine shot for our baby Polina and she wanted to know if we are coming in 2 weeks due date.
I asked her what is the overall situation with medications. She said it’s a complex question. We lack good quality military first-aid kits and many drugs for regular civilians. Many people left the country, not all pharmacies work, not all warehouses work, many people panicked and bought medicine years ahead for themselves, so others left with nothing. Typical panic/wartime behavior and problems. For the first weeks, money is not a problem as everyone internally mobilizes and donates their savings. But most of the national economy is at a stop, so people soon will be out of money. That’s where external help will be crucial. Also, months ahead, there will be a need for many different, often expensive prosthetics for wounded soldiers.

So to be short – two significant items related to medicine here:
1) Money – will be highly critical in April, May, and further.
2) Medical supplies that can be brought to the Polish-Ukrainian border are critical now and will be critical for the next few months.

Thank you for being so helpful. 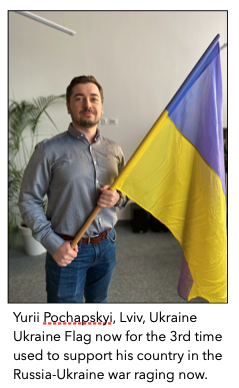 My name is Yurii Pochapskyi. I am proudly holding my Ukraine flag that has been with me for the past 18 years. This very flag has now been part of three of the four Ukrainian revolutions for freedom. I am proud of my country and my flag because it is a symbol of resistance against authoritarian government of Russia and Ukraine’s fight for freedom.
Yurii Pochapskyi, Lviv, Ukraine
Ukraine Flag now for the 3rd time used to support his country in the Russia-Ukraine war raging now.

In 1990, when the first Ukrainian revolution against Russia started called the Revolution on Granite (https://bit.ly/3JwqnZ4), I was only 3 years old which is too young to carry my country’s blue and gold flag. It was the first major political protest of Ukrainians that took place in Kyiv, on the famous downtown square named Maidan Nezalezhnosti or Independence Square. In 1991, this revolution opposing Russian dominance over Ukraine resulted in Ukraine becoming an independent and sovereign nation.

In 2004, the second Ukraine revolution led by the people demanding freedom from Russian incursion occurred. Known as the Orange Revolution (https://bit.ly/3qpkVzt), the people opposed again Russia’s efforts to falsify the results of presidential elections. Maidan Nezalezhnosti was the site in Kyiv where over a million people protested Russia’s interference in our elections. I was 17 years old and purchased this flag as I protested against illegal election results. My flag and I spent a week on the streets of Kyiv protesting and eventually succeeding.

In 2014, the next revolution took place — the Revolution of Dignity (https://bit.ly/3CZ4z5K). People started protesting the decision of our pro-russian president who sought to block Ukraine’s application to join the EU, the European Union. Rather, the elected president sought closer ties with Russia. This time more than 100 people were killed. They are known as Heavenly Hundred. I joined a protest in Kyiv once more taking this very flag that I cherish with me as I waved it in solidarity. 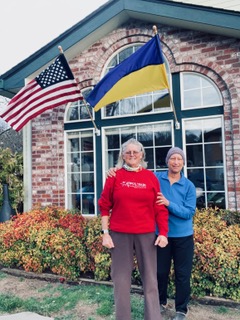